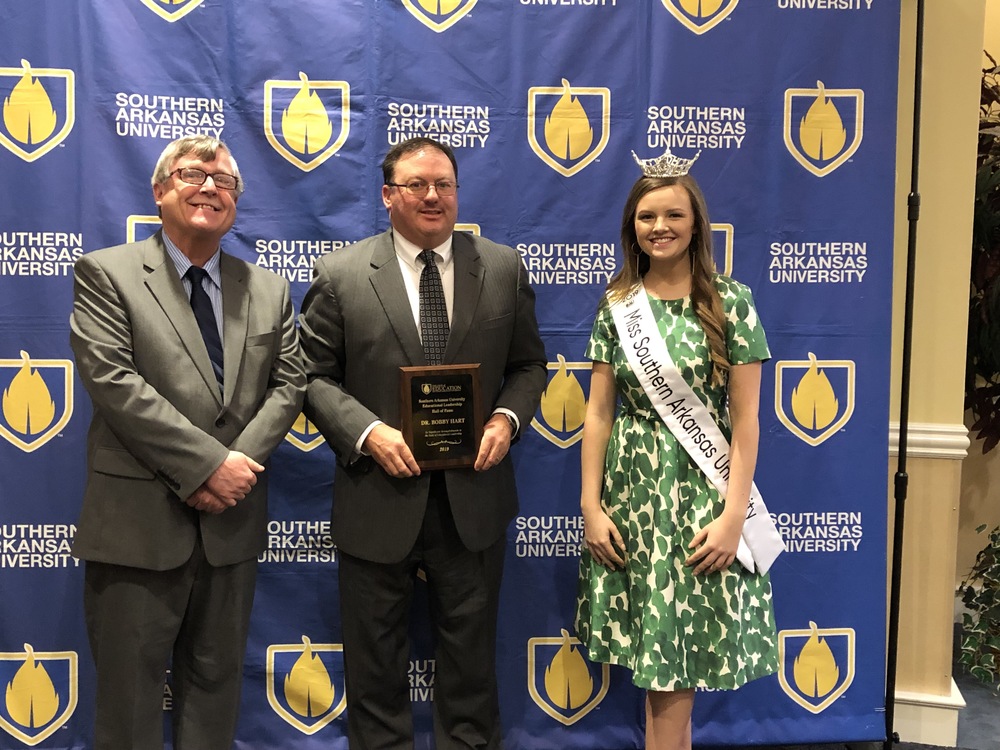 MAGNOLIA – Hope Public Schools Superintendent Dr. Bobby Hart was inducted into the 2019 class of the Southern Arkansas University Educational Leadership Hall of Fame in ceremonies on the SAU campus in Magnolia Tuesday night.

Dr. Hart was among four area educators honored based upon nominations and recommendations to the SAU College of Education made through a university committee to the SAU Educational Leadership Program.

Program Director Dr. Connie Wilson said in an overview of the evening that Hart’s selection was rooted in his relationship with students in the Hope Public Schools. Wilson said she saw that relationship in the way students readily approached him during a campus visit.

“Dr. Hart; wow, what a connection to the students,” she said.

Hart is in his seventh year as superintendent at Hope, after eight years as Genoa Central High School Principal in Texarkana. He began his career in public education at Clarendon High School as a teacher/coach in 1994, before becoming a graduate assistant in the athletics department at Henderson State. Hart taught, coached and served as athletic director at Van-Cove High School for three years, prior to teaching and coaching at Hampton High School, before returning to Clarendon as athletic director and head football coach in 1999.

Hart reflected upon his educational background while growing up in rural family life in his acceptance. He said that he was impressed with the value of education when his mother returned to the classroom to earn her GED in order to pursue nursing.

He said he has attempted to impress upon his children that education is not merely a means to an end, but a valuable part of what shapes life.

“I may be one of those who are better educated than their talent can carry,” he quipped.

Active in community life in Hope, Hart has served as president of the Hope Rotary Club, and is a Rotary Paul Harris Fellow; has served on the board of the Hope/Hempstead County Chamber of Commerce; and, is a member and serves on the Stewardship Board of the First United Methodist Church in Hope.

Keynote speaker for the evening, Dr. Ivy Pfeffer, Deputy Commissioner of the Arkansas Department of Education, said the honorees understood that leadership requires service to others, development of the potential in others, concern for others, and a vision that “sees things, not the way they are, but the way they ought to be.”

Dr. Pfeffer said the honorees were “transformers” rather than “bench warmers” who are helping to push public education in Arkansas forward.

“Your leadership matters,” she said.