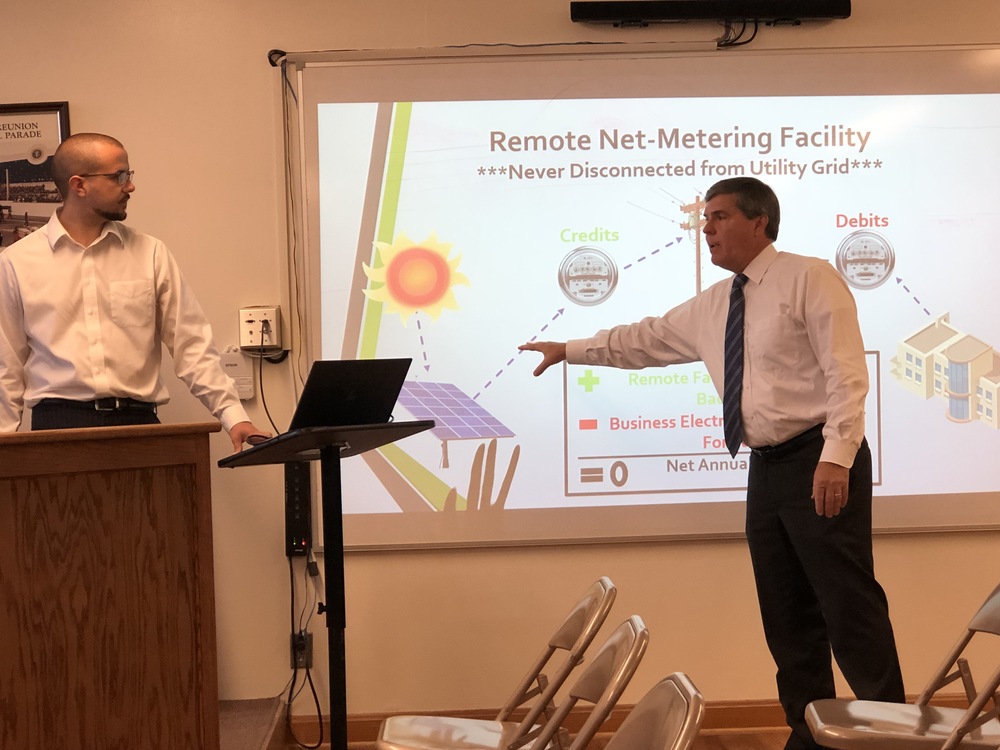 HOPE – The Hope Public Schools Board agreed by consensus Aug. 15 to authorize Superintendent Dr. Bobby Hart to explore the issuance of a Request for Proposals to determine whether the HPSD will go solar.

The non-binding authorization was the result of a presentation to the board by former Arkansas Lieutenant Governor Bill Halter, now CEO of Scenic Hill Solar, a provider of solar power electrical utility alternatives for public entities such as school districts.

“When I got out of public life, I gravitated toward the power supply industry,” Halter said.

He said solar power has become increasingly more cost-effective in recent years, while remaining a regulated utility concept in Arkansas, which provides protection to customers.

“We are working to fashion the policy that helps everyone,” Halter said of his company’s relationship with the Arkansas Public Service Commission.

Scenic Hill Solar is currently the 22nd largest developer of solar powered electrical services in the United States, and has recently completed a 6.5 megawatt project for the City of Camden. Halter said the company also has built a solar power plant for the North Little Rock operations of L’Oreal cosmetics, which it completed in 49 days.

Flexibility and versatility were Halter’s emphasis, noting that Scenic Hill Solar can build a solar power plant for the customer; provide electrical power from a plant it owns through service interconnection; or, fashion an alternative mix of options.

“That is a lot of electricity; and it is probably the second-largest cost in the budget,” he said.

Halter said a 2.1 megawatt custom solar power array for the HPSD would require about 12 acres of land.

“That would fully offset your power supply for electricity,” he said.

The board wanted to know more about the cost savings, budgetary consistency and direct service of a customized option.

“I would like to know why costs associated with solar power have dropped so rapidly,” Zone 8 Representative David “Bubba” Powers asked.

“It’s just that the manufacturing equipment that makes solar cells is the same that makes computer chips,” he said.

While those costs will “bottom out” because of associated labor costs in construction or installation, solar power as a source of electricity is becoming more cost efficient because of its consistent availability at the source at virtually no cost, Halter said.

“You are going to have light shed on it the whole way,” he said.

--Approved facilities use requests for the Hope High School auditorium for a Dr. Martin Luther King program; from Wildcat Youth Football for Hammons Stadium; and, for the HHS cafeteria for the annual Hope Kiwanis Club Pancake Supper.