This search form uses an instant search feature. As you type, search results will appear automatically below the search field. When you've entered you desired search terms use tab to navigate through the available results and hit enter to open the selected page or document.
School board tackles full plate
Ken McLemore, Hope Public Schools
Wednesday, February 17, 2016 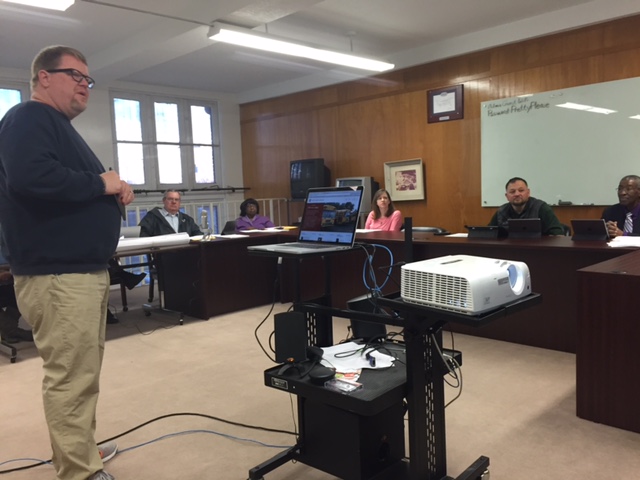 HOPE – The Hope School Board tackled a full plate of items Monday night as it unanimously extended the contract of HPSD Superintendent Bobby Hart and addressed two new academic initiatives, as well as a three-phase building plan for the expansion of Beryl Henry Elementary School.

Hart’s contract was extended by the board for one year. He came to the HPSD as superintendent in April, 2012, from the Genoa Central district near Texarkana. A native of Bryant, Hart graduated from Henderson State University.

The contract extension comes on the heels of an evaluation process completed by the board in January.

Hart announced one new academic initiative Monday night and the board acted on another, as he briefed the board on an early childhood literacy initiative and asked the board to authorize a principal’s position for the new Hope Academy of Public Service.

He said the early childhood initiative is in its organizational stages.

“We are starting to reach out to people and develop our plan,” Hart said.

He said the initiative will deal with five categories of improvement in early childhood literacy including the school setting itself, teacher and student attendance, parent and community engagement, early childhood development, and bridging the “summer gap.”

Hart said currently 80 percent of HPSD kindergarten students are ready for first grade, for which he credited teacher engagement.

Also Monday night, Hart received approval from the board to begin advertising for a principal for the grades 5-8 Hope Academy of Public Service. He said public forums conducted recently for parents at Beryl Henry Elementary School and Yerger Middle School were well attended and the concept well-received.

The school will be housed on the former Garland School campus, and will be a public service-centered academy that will provide a rigorous curriculum to prepare its students as college-ready scholars through collaborative and individual learning and computer-centered instruction in conjunction with the William J. Clinton School of Public Service in Little Rock, the University of Arkansas Hope-Texarkana, and other institutions of higher education.

Hart said the district will accept applications from within and outside of the district for the position. The Hope APS is scheduled to begin open enrollment Feb. 22 through April 4, and classes are to begin in August, 2016.

He said a parental advisory committee for the Hope APS will have its organizational meeting Tuesday night at 6 p.m. in the school administration building conference room. The meeting is open to the public, Hart said.

The board also learned Monday night that architectural plans for the BHE expansion and removal of 30-year old metal buildings from the campus have been set. Hart told the board that architects envision a three-phased approach: first, the renovation of the front of the existing building to provide for conversion to office space; secondly, the construction of new classrooms and activity area; and, third, demolition work and removal of existing metal buildings.

Completion of the project is expected to take up to a year.

Also Monday, the board resolved its questions concerning a proposed contract for rehabilitation of the Hope High School track, and confirmed the award of the work to the only bidder for the project, Tri-State Track, at a cost of $94,800. Hart said the company will issue a six-year warranty for the work.

--Recognized art students from Hope High School for their creation of a mural for the entrance to the Alternative Learning Center at HHS.

--Heard a report from Assistant Superintendent for Transportation and Facilities Steve Bradshaw concerning the success of the district’s recent surplus property sale, which netted some $19,384.40.

--Heard a report from Hope High School Principal Tommie Campbell regarding a revamping of scheduling at HHS.

--Received a brief tutorial from HPSD Technology Coordinator Jeff Madlock regarding a new mobile phone application which allows users to access websites for each school campus and the district to obtain up-to-the-minute notification and information.

--Adopted on first reading a series of Arkansas School Board Association model policies.

--Approved facilities rental requests for the 21st Century Learning Program fashion show, a spring pageant, and a dance on the Hope High School campus; but, denied a request from a semi-professional football league for use of Hammons Stadium for lack of liability insurance.

--Rescheduled its March meeting to March 28 because of spring break.