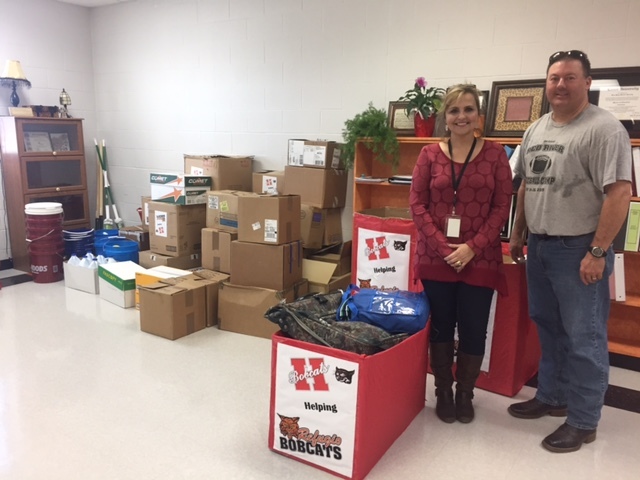 The Hope Bobcats, through student organizations on each HPS campus and community donations, extended aid to the Refugio Bobcats after the historic storm swept through this town of about 4,000, damaging or destroying almost every structure in the community, some 90 miles southwest of Houston, Texas.

“It’s been absolutely amazing to see the outpouring that has happened, not only from Texas, but people like you who have driven so far, opened your hearts and your generosity,” RISD Business Manager Lisa Herring said.

Many Refugio students lost everything they had when their homes were destroyed, Herring explained.

“We have lots of kids whose homes were unlivable,” she said. “We had food trucks from all over the nation; and, for those two weeks, we weren’t too proud to stand in that line, because a hot meal was something nobody had.

“It was a pretty helpless feeling, but at the same time it brought out the best in people,” Herring said.

Refugio was without power and potable water for two weeks after the August storm hit with winds of 130-plus miles per hour and rainfall up to 12 inches. Blue and black tarps still cover part or all of almost every standing residential rooftop in the small community.

Somehow, she said, the Refugio schools managed to begin classes on Sept. 18.

“We were scheduled to start on Aug. 28, but Hurricane Harvey took care of that,” Herring said.

Ongoing construction in a bond-financed remodeling program at the high school campus at the time of the storm made starting repairs easier, she said.

“We had crews here and they were able to switch gears and help us recover; so, that was the only reason we were able to get back on our feet that early,” Herring said.

Remodeling plans were put on hold in favor of salvage operations.

“At the elementary school, we have what we call an old primary wing and several classrooms that were ruined by water damage,” Herring said. “Offices were completely destroyed and we had to move out of them. That building, we can’t get back into; it’s not usable.”

Residual effects of the storm have been problems with mildew and weakened structures. A remodeled gymnasium was heavily damaged by water after its roof was torn away by the storm’s winds. And, only recently, district officials discovered that the new wooden gym floor has buckled completely.

Refugio Superintendent Melissa Gonzales was not at work when the Hope contingent arrived Thursday because the ceilings in her home collapsed as the result of residual roof damage. Herring said such aftermath problems are continuing.

“I was sitting in here in my office Friday night and it was pouring rain,” she said. “And, I could hear water coming in from somewhere; so, we had to put a trash can under it where it was just pouring through the ceiling.”

But, Herring said the Refugio students are glad to be back in school and know that life can begin to return to normal.

“You didn’t have the normal hiccups you have at the beginning,” she said. “It was ‘let me in those doors.’ They were glad to have some normalcy and be back in a routine; they knew they were going to have a breakfast and a lunch.” 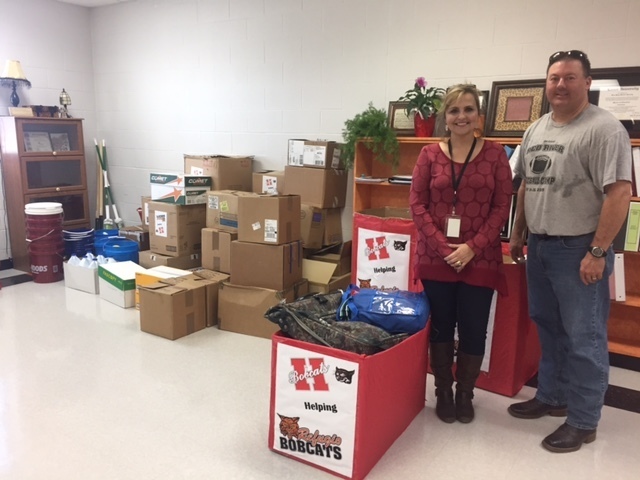