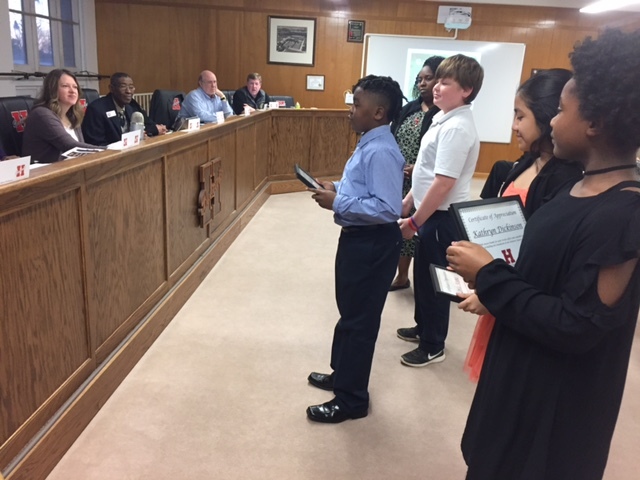 “Please join Hope Public Schools students, parents, and staff in honoring and recognizing the commitment and dedication to young people and the community at large that our school board members exhibit by volunteering their time and energy to serve in such a valuable role,” Hope Superintendent Bobby Hart said in recognition of School Board Appreciation Month in Arkansas.

The members of the board were recognized Monday night during the panel’s monthly meeting with presentations from Hope High School and Beryl Henry Elementary School. Activities honoring the board’s service continued Tuesday with a reception at the Hope Academy of Public Service campus, and were also set for the Clinton Primary School campus on Thursday evening at 6 p.m. when kindergarten students will perform in honor of the board at the CPS Parent/Teacher Organization meeting.

A reception for board members is also planned on the Yerger Middle School campus Jan. 30 at 9 a.m.

HHS Principal Bill Hoglund presented the board members with original lithograph prints of the HHS main building drawn by HHS alumnus Chad Miller in 2005. Hoglund said Miller produced the original of the lithograph not long after the fire that devastated the north end of the building.

BHE Leadership Council members Isaac Hellums, Brisa Barrios, Jodie Hill, and Romelo Ford presented each board member with a Certificate of Appreciation in recognition of the board’s leadership of the district and in the community.

And, HPS Nutrition Director Deanna Gilbert gave board members a “goodie heart” with personal snacks for each member.

Among the seven members of the Hope board, there is almost a half-century of service that draws from the professional and educational experience of its membership. Two members of the board, President Willie Buck and Zone 6 Representative Kathryn Dickinson are retired educators with more than a half-century of teaching experience between them. Buck is retired from the business education faculty of the University of Arkansas Hope-Texarkana, while Dickinson is retired from the Hope Public Schools, where she taught at the primary school level.

Zone 1 Representative Viney Johnson holds the longest tenure on the board, having first been elected in 1989. Johnson, who is the minister of Goff Chapel CME Church, also continues to serve as the financial designee of the board.

Zone 2 Representative David “Bubba” Powers has served as a state legislator representing Hempstead and Nevada counties, and has been employed by the Arkansas Juvenile Justice System for many years.

Two board members are currently certified law enforcement officers for the City of Hope. Zone 7 Representative Jesus Coronado, first elected in 2009, is sergeant in the investigative division of the Hope Police Department; while, Zone 4 Representative Jimmy Courtney is the lieutenant in the Hope Police Department investigative division.

Coronado currently serves as vice president of the school board.

Zone 5 Representative Linda Haynes was elected to the board in 2015, is a homemaker and serves as secretary of the board. She is active as a member of the Hope Academy of Public Service Parent Advisory Council.

The current board has also continued to grow through professional development provided by the state, with some 78 total hours gained in 2017 alone. Johnson has been recognized as an Arkansas School Boards Association Pinnacle Award Board Member; while, Coronado and Buck are recognized as ASBA Master Board Members.

The Arkansas School Boards Association notes that publicly elected school boards are responsible for setting policy in their respective districts; overseeing district finances and budgeting; hiring the district superintendent; approving curriculum used in the district; ensuring maintenance and oversight of facilities; and, establishing the vision and mission of the district. 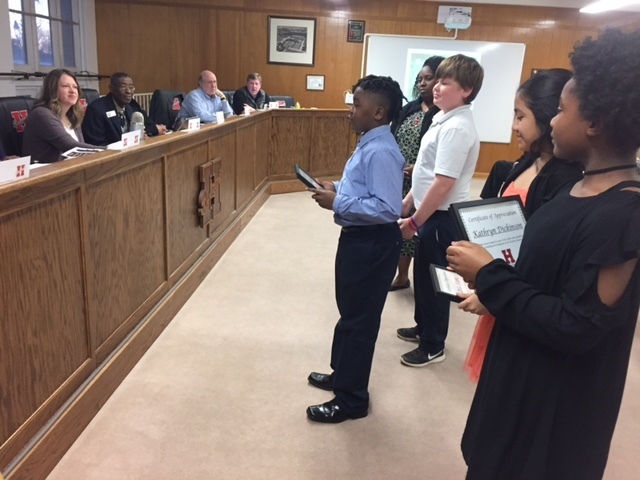