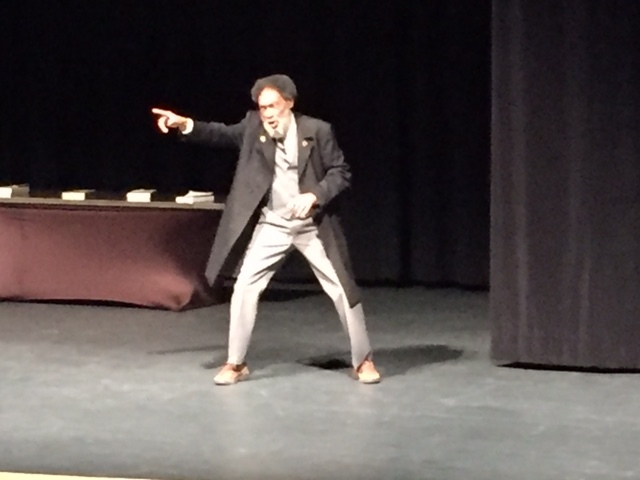 HOPE – He took his name from the character of a knight in a classic epic poem; escaped slavery in the Civil War South by posing as a sailor; and, became a counselor and friend to President Abraham Lincoln.

Charles Everett Pace’s portrayal of former slave and abolitionist champion Frederick Douglass recounts the events leading to the Emancipation Proclamation, the incorporation of Black soldiers into the Union Army, and the passage of the 15th Amendment to the U. S. Constitution, giving Black men the right to vote in America.

Pace’s hour-long presentation and question/answer session with students from Hope and Prescott here Thursday at Hempstead Hall on the University of Arkansas-Hope campus provided a context for the history which it represented.

Pace, of Texarkana, Texas, is a graduate of the University of Texas who brings his “Conversation with Frederick Douglass” in a style that was last seen on the American Continent prior to the Great Depression.

Pace said the Chautauqua style of his presentation, which varies through a repertoire of characters from Douglass to author and poet Langston Hughes, and civil rights activist Malcolm X, among others, creates an interactive atmosphere which was typical of the theatrical concept.

He breaks his presentation into three “acts” in keeping with the classic Chautauqua format.

The first act is the character portrayal, which not only recounts historical elements in the life of the subject character, but also involves emotional, moral and social points.

The second act is a question and answer session that breaks the fourth stage wall between actor and the audience while Pace remains in character; and, the third act is an explanation of Chautauqua and Pace’s historical theatrical approach through questions from the audience, which also includes seminar or workshop elements in certain cases.

Asked during the second “act” how Douglass escaped slavery, he recounted that Douglass’ first such attempt with four other men failed because “someone sold us out.” Later, while working as a “city slave” in Baltimore, he had a general freedom of movement about the city while employed in the shipyards. While in the city, Douglass met the woman whom he would later marry, a “freed woman” named Anna Murray. After Douglass obtained stolen papers he used to pass himself as a merchant marine sailor, Murray made him a seaman’s uniform, which he wore when he boarded a train and rode through Delaware; then, traveled to freedom in New York.

Compelling in Pace’s portrayal is a scene in which he re-enacts a fight which the young Douglass had with a white overseer which he said taught the young man who would later become the leading Black advocate for emancipation how to overcome fear. 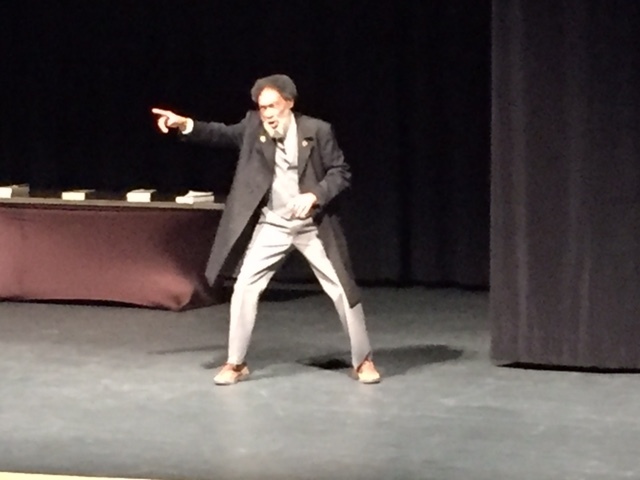