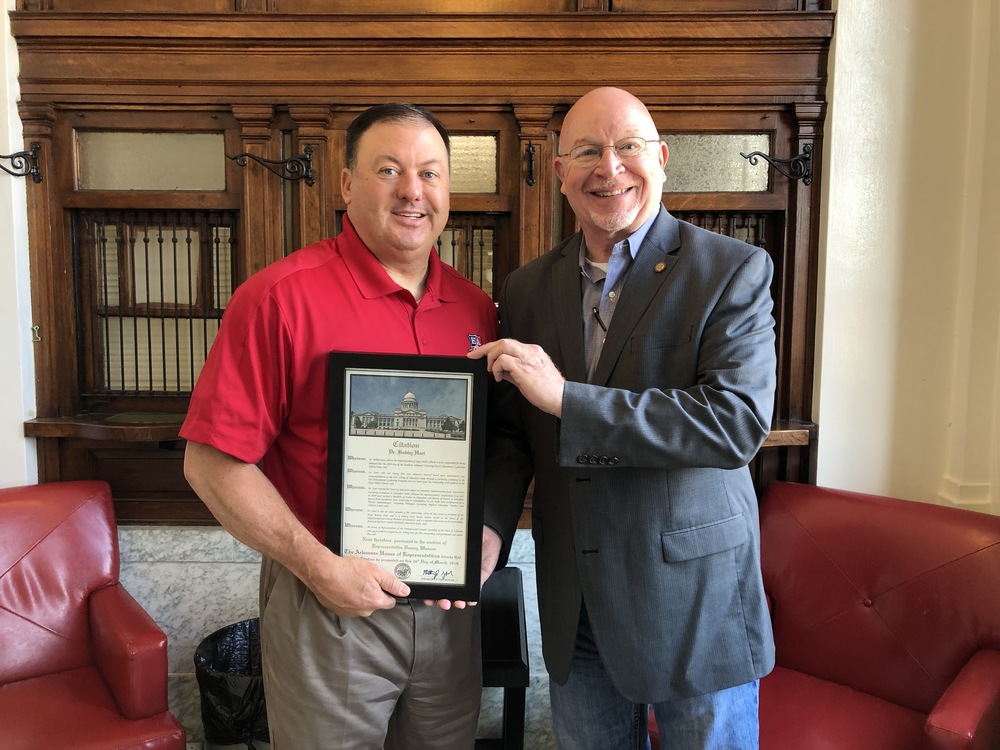 HOPE – Dr. Bobby Hart, superintendent of the Hope Public Schools, has been honored by the Arkansas House of Representatives in recognition of his induction into the Southern Arkansas University Educational Leadership Hall of Fame, and his innovative leadership of the Hope district.

State Representative Danny Watson, R-Hope, presented Dr. Hart with the citation adopted by the House on March 26. Rep. Watson led the motion in the House to adopt the recognition.

“I am proud to present this to Dr. Hart; and, he is very deserving of it,” Watson said.

The resolution cites Hart’s educational background and professional certifications, as well as his activity in the Hope community, in recognition of his “outstanding accomplishment” and his relationship with students in the Hope district.

Hart was inducted into the SAU Educational Leadership Hall of Fame in March in ceremonies on the SAU campus. Induction speaker Dr. Ivy Pfeffer, deputy commissioner of the Arkansas Department of Education, said Hart was among the “transformers” who are helping to push public education in Arkansas forward.

Hart is in his seventh year as superintendent at Hope, after eight years as Genoa Central High School Principal in Texarkana. He began his career in public education at Clarendon High School as a teacher/coach in 1994, before becoming a graduate assistant in the athletics department at Henderson State. Hart taught, coached and served as athletic director at Van-Cove High School for three years, prior to teaching and coaching at Hampton High School, before returning to Clarendon as athletic director and head football coach in 1999.

Hart has served as president of the Hope Rotary Club, and is a Rotary Paul Harris Fellow; has served on the board of the Hope/Hempstead County Chamber of Commerce; and, is a member and serves on the Stewardship Board of the First United Methodist Church in Hope.