Rotary names teachers of the year

Beryl Henry Elementary School literacy teacher LaToya Martin, a 15-year educator, was presented the Primary Teacher of the Year honor; and Hope High School 9-12 agricultural sciences teacher Christina Smith, who came to HHS two years ago, was named the Secondary Teacher of the Year during the annual Rotary banquet Thursday night at Hempstead Hall on the University of Arkansas Hope-Texarkana campus.

Rotary committeeman John Watkins introduced both recipients and offered commentary from the nomination letters for Martin and Smith. Both teachers were presented certificates of recognition, an individual monetary award and a classroom monetary award by Watkins in behalf of the Hope Rotary Club.

Martin is a graduate of the University of Central Arkansas in Conway, with a Bachelor of Science degree in Early Childhood Education, and she is certified to teach in grades P-8. She taught first grade for seven years in the Pulaski County School District in Little Rock, and Pre-kindergarten for three years privately, along with working as an alternative classroom teacher for three years prior to arriving at BHE, where she has taught for five years.

“Ms. Martin is a model teacher for her colleagues and she always finds ways to keep the teacher morale high,” her nomination letter states. “She displays a great sense of humor and personality which creates a positive school climate.”

Martin is characterized as having an engaging teaching style that makes it evident her students learn, but have fun doing so.

“She is a team leader and her co-workers have a lot of respect for what she does with out students at Beryl Henry Elementary School,” the nomination states.

Martin is a member of the Pentecostal Temple Church, where she is active in church functions; she volunteers in community activities, and is an avid reader.

“She is willing to go the extra mile and ensures that every child has an opportunity for academic success in the classroom,” the nomination letter adds.

Smith is a graduate of Southern Arkansas University in Magnolia, with a Bachelor of Science degree in agricultural business, and Master of Arts degree in teaching. She has taught in the 9-12 agricultural sciences program at Hope High School for two years, according to her nomination letter.

“Mrs. Smith’s content knowledge and classroom management skills are second to none,” the nomination states. “Students and parents request Mrs. Smith as an Ag teacher because of her innate ability to know what to do to met the need. She is a stellar mentor for all our students.”

Smith is characterized as a teacher who sets high expectations for her students.

“She meets the needs of the students through developing the necessary trust relationship along with setting very high expectations for each student,” the nomination states.

Smith is the faculty sponsor for the Hope Future Farmers of America chapter, one of the largest and oldest in the state, which remains active in state and national FFA activities through her guidance, the letter notes.

“While the district does not have a school sponsored farm, she uses her own farming business to teach the students the hands on pieces of farm management and the level of work required to work a farm,” the nomination adds.

Smith and her family attend the Cowboy Church in Hope, and she is active in other school and community efforts, the letter states.

“Mrs. Smith is an outstanding young teacher that truly exemplifies what is great about our school district,” the nomination letter adds.

Keynote speaker for the evening was UAHT Chancellor Chris Thomason, who reflected on the importance of a mentoring teacher in his life and the value of the teaching profession in a rapidly changing world.

“I’m a product of the schools here in Hope,” Thomason noted.

He said his wife, Penney, is a teacher, while his son, Allen, is a fifth grade student at Beryl Henry Elementary School. Thomason said the recognition which Rotary gives teachers each year is not simply a celebration of individual excellence, but it is a celebration of what is best about the Hope Public Schools and the community.

“I didn’t know it at the time, but I was learning structured writing; and, that served me well when I became a lawyer,” Thomason said.

Beyond the teaching technique, however, Thomason said Burgess instilled in him the belief that he could do anything in life that he pursued. He said we all remember those kinds of teachers.

“You are the bright light on the path to the foundation of the American Dream,” Thomason said. 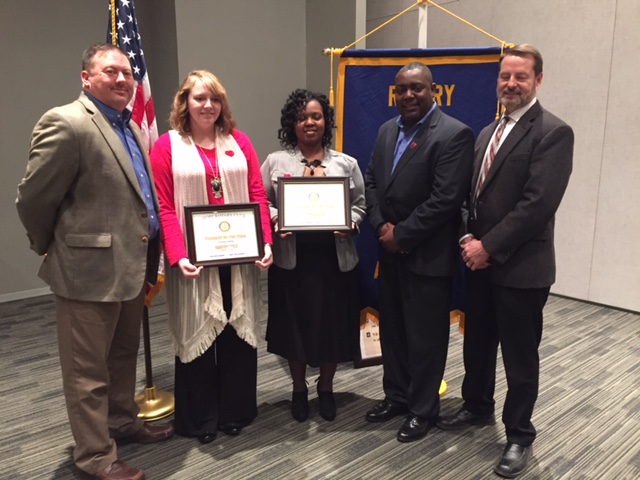