HOPE – An education career largely centered in Southwest Arkansas and a penchant for innovation are notable in the resume of Michael Odom as one of four finalists to become the next superintendent of the Hope Public Schools.

Odom is a 2006 graduate of Southern Arkansas University in Magnolia with a BA in Music, and he took his MA from the University of Louisiana - Monroe in 2011. Odom received his MS in Educational Administration from SAU in 2014. He is currently principal of Arkansas High School in Texarkana, having previously served as K-12 Principal for the Nevada School District in Rosston, Ar. from 2015-2018. Prior to then, Odom was Director of Orchestra for the El Dorado School District from 2014-2015 and Elementary Principal in the Stephens School District from 2013-2014.

Reference research compiled by consultants for the McPherson-Jacobson, LLC, search firm retained by the HPS Board of Education characterize Odom as intelligent with a common-sense approach to solving problems, soliciting ideas from others and listening before taking action.

Dr. Kieth Williams, McPherson-Jacobson lead consultant, said in his report to the HPS Board of Education that, “Superintendents who have hired him commonly state he is an exceptional employee. Numerous references cited they respected him due to his humility, being genuine, and he shows respect for others.”

“At Arkansas High he has developed partnerships with colleges, the educational cooperative, and expanded opportunities for students, creating flexibility to allow for success,” Williams reported.

He said Odom is credited with establishing a health clinic at Arkansas High and he created a “community service-learning credit” which 100-plus AHS students earned last year.

“He is very strong in relationships; connects with the students and has earned their respect,” Williams reported.

Odom is credited with increasing the Advanced Placement exam pass rate at AHS from 28 percent to 43 percent in three years, Williams said. He characterized Odom as passionate but not impulsive, a quick learner, and a good presenter and trainer in poverty-related education issues.

The board will interview each candidate in a formal executive session after day-long introductory campus tours and focus group meetings with students, administrators, faculty and staff May 24 -27. Each candidate and their spouse will meet with the full board for dinner prior to the formal two-hour interview with the board at the end of the day. Odom was interviewed May 25. The board is expected to name a new superintendent June 1 who will assume duties here on July 1. 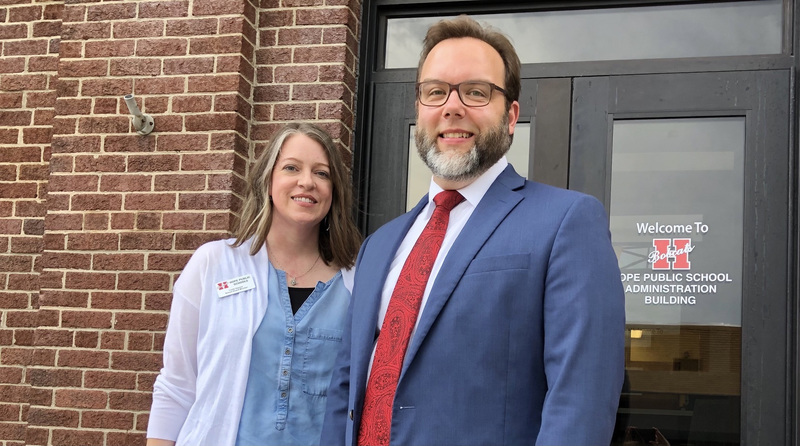 Hope Public Schools Board of Education President Linda Haynes, left, welcomes Michael Odom, principal of Arkansas High School in Texarkana, as the second of four finalists to be interviewed by the board for the position of superintendent of the district. The board anticipates a decision on the position by June 1. – Ken McLemore/Hope Public Schools