HOPE – Dr. Jonathan Crossley’s resume as one of four finalists to become the next superintendent of the Hope Public Schools is marked by a capacity for motivating others.

Dr. Crossley is a native of South Carolina who holds a BA in Political Science from the University of South Carolina in Columbia, S.C., but moved to Arkansas where he received an MA in 2015 from Arkansas Tech University in Russellville before obtaining Ed.S. and Ed.D. degrees from ATU in 2018.

Reference research compiled by consultants for the McPherson-Jacobson, LLC, search firm retained by the HPS Board of Education characterize Crossley as dynamic, a high-performer for whom “failure was not an option in his classroom.”

“He was recognized as the Arkansas Teacher of the Year in his fifth year in the profession,” Dr. Williams reported. “Colleagues in Palestine/Wheatley commonly use the adjective ‘awesome’ in describing Dr. Crossley.”

“He is very confident and always seeking to learn and grow professionally,” Williams reported. “He is fully invested in his work and has a strong work ethic.”

Crossley understands the impact of poverty upon education from his roots in North Carolina, Williams reported.

“References frequently describe Dr. Crossley as being passionate about serving underprivileged children,” he reported. “In summary, he gets things done and follows through, he is responsive, and motivates people to perform.”

Crossley gained broad K-12 experience during service with the Arkansas Department of Education Division of Elementary and Secondary Education.

“He values community engagement and is active in the community,” Williams reported. “Individuals he supervises commonly state he communicates clear expectations and is supportive; still, he does not compromise on desired outcomes, and he is patient and always provides assistance when needed.”

The board interviewed each candidate after day-long introductory campus tours and focus group meetings with students, administrators, faculty and staff May 24 -27. Each candidate and their spouse met with the full board for dinner prior to the formal two-hour interview with the board at the end of the day. Crossley was interviewed May 27. The board is expected to name a new superintendent after June 1 who will assume duties here on July 1. 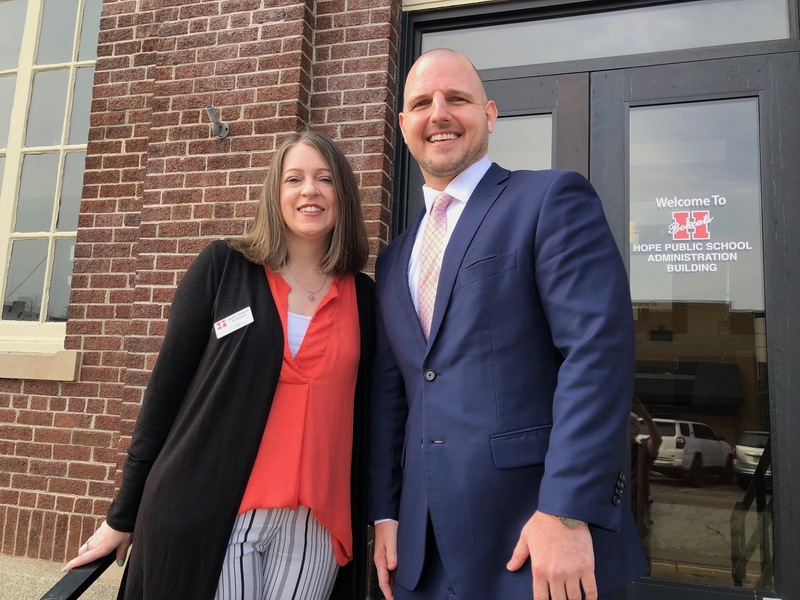 Hope School Board of Education President Linda Haynes, left, greets Pine Bluff School District Assistant Superintendent Dr. Jonathan Crossley prior to a day-long series of campus tours and interviews as one of four finalists for the position of superintendent of schools in Hope. – Ken McLemore/Hope Public Schools